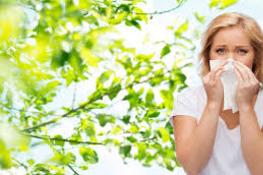 Allergic rhinitis is the medical term for allergies affecting the mucous membrane of the nose. Hay fever is the term sometimes used for allergic rhinitis, but hay fever is actually a misnomer because allergic rhinitis is not caused by hay and does not produce fever. Allergic rhinitis usually results from allergies to a variety of things, including pollen, dust, molds, insect debris, and animal danders.
Symptoms of allergic rhinitis include stuffed-up nose, runny nose, postnasal drip, sneezing, watery, itchy eyes, sore throat, and coughing. Allergic rhinitis can also cause fatigue, nausea, and difficulty concentrating. I have seen many school children whose school work improved dramatically after their allergic rhinitis was treated. Allergic rhinitis is a local disease, but it can affect every aspect of one's life.
For people with mild allergic rhinitis, over-the-counter medication may be enough. Antihistamines are effective mainly when drainage is a problem. If nasal stuffiness is the main symptom, one should take an oral decongestant instead of an antihistamine.  Decongestant nose sprays relieve stuffiness instantly but should not be used for more thatn a few days because they can cause rebound swelling of the nasal mucous membrane. There are new types of antihistamines, which are sold by prescription only, that do not cause sleepiness.
For moderate to severe allergic rhinitis, Cromolyn or a corticosteroid nose spray should be used regularly during the allergy season. Sometimes, a short course of systemic corticosteroid is also required.
For people who have significant symptoms despite these medications,immunotherapy (allergy shot) is recommended. Immunotherapy is the injection of allergens to induce the production of antibodies which neutralize the allergens as they are encountered by the body.